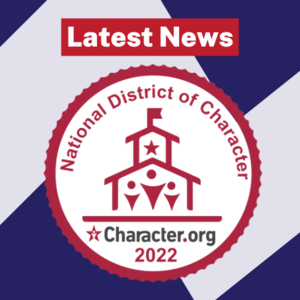 San Antonio, TX - May 17, 2022, - The School of Science and Technology Discovery District has been recognized by Character.org as the National District of Character.


Character.org announced today that the SST Discovery District earned their highest distinction as the National District of Character, the only district recognized in the state of Texas. According to their press release, “we are pleased to announce and celebrate the schools and school districts that have earned this national recognition,” said Dr. Arthur Schwartz, President of Character.org. “Each of these schools has put in place a comprehensive approach to help students understand, care about, and consistently practice the character strengths that will help them flourish in school, in relationships, in the workplace, and as citizens.”


“We are so excited to see how our journey of character education has grown from when we opened our first school in 2005 to now being nationally recognized by Character.org. Their 11-Principles framework has helped us successfully sustain character development in our students, families, staff, and schools. We look forward to a future where our students make the world a better place from the character education they received at SST. ” says Mr. Fawzy Shemshack, Superintendent of the School of Science & Technology.


SST Discovery District earned recognition as the State District of Character in January 2022, the only distinction in Texas and one of two districts identified in the United States.


School of Science and Technology Public Schools drive academic and socio-emotional development through a college preparatory, STEM-based learning model. SST’s model is anchored on 21st-century skills, embraced by a character-building approach, and delivered in an enriching, safe, and student-centered learning environment.


ABOUT CHARACTER.ORG: Character.org is a worldwide network that empowers people of all ages to practice and model the ethical core values that shape our hearts, minds and choices.  Formerly known as the Character Education Partnership, the organization has relentlessly advocated for character since 1993. Today, Character.org creates and shares resources that support people around the globe, including the 11 Principles Framework for Schools: A Guide to Cultivating a Culture of Character. The organization’s vision is to be the global leader and voice for developing character in families, schools, and organizations. Learn more at Character.org.